1 July 1950: the court makes an entry in the register of the “Rubber” company cooperative, which is located at 1 Średzka Street in Poznań.

August 11, 1950: the court makes an entry in the register of cooperatives – the name is changed to Spółdzielnia Pracy Chemiczno-Drogistowska, new statutes are adopted.

July 1959: the property where the company is currently located is purchased, i.e. at 14 Główna Street in Poznań.

Beginning of the 1990s: the leased buildings at Koronkarska and Gorzysława Streets are handed over. All production is limited to the building at Główna Street. 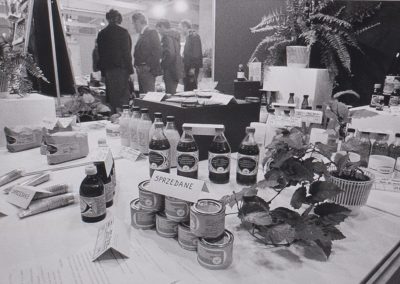 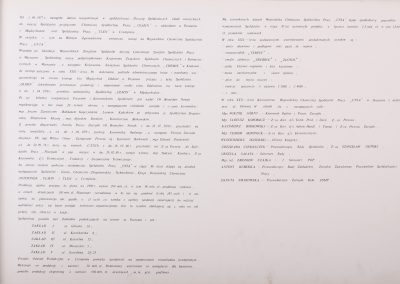 A fairy tale about the Unia Factory, a story in a nutshell:
It was 1949… Wisła Kraków became Poland’s champion in football, the North Atlantic Treaty (NATO) came into force, Tadeusz Drozd was born, snow fell in Los Angeles – really “laughter is worth it”. But is that all? The answer is simple, no! In 1949 the company started its existence, which is now famous for its production of the Tytan brand, i.e. Zakłady Chemiczne Unia (Unia Chemicals Factory).

In 1949, fourteen former members of the “Pegum” company founded the Rubber Products Factory. Already a year later, on 11 August 1950, the court made an entry in the register of the Cooperative and the Chemical and Road Work Cooperative was established. The beginnings were very difficult. A handful of founders without the necessary experience dared to run a cooperative enterprise. From the first years of activity, efforts were made to attract more experienced people in the field of production organization and administration. At that time, the company produced a range limited to rubber products.

Another important event in the company’s activity is the purchase of real estate in 1959 at 14 Główna Street in Poznań, where the Credit Union’s seat is still located today. Don’t worry, it has been modernized several times since then. There has been a change in the production profile. Rubber products have been turned into household chemistry. It is worth mentioning that before the purchase of these properties, the Cooperative operated in three plants. These were the rubber, chemical and candle production departments, which I did not mention before. Such products as wax for belts, candles, glass putty and dust were created at that time.
The year 1964 was a synthesis with Technology located in Koronkarska Street. After this event there was a significant development of production and property of the Cooperative, the assortment was also extended. The year 1970 was another merger, this time with the Poznań Chemical Work Cooperative. In the mid-seventies, the “Oxygen” Cooperative from Czempin and the “Olmin” Cooperative from Międzychód were merged. The 1980s are marked by development. We put into use another production hall. The basic assortment was then:

In the nineties came the period of market economy, the struggle for the customer. The conditions of operation have changed dramatically. A wave of a new generation of products, previously unknown on our market, came from the west. Nicely packaged and fragrant products attracted customers. In short, we undertook a glove. We adapted the technology to the market requirements and won a solid place on the market. Before the transformation period, we were associated with “Terpin” and shoe pastes and floor preparations, and now mainly with cleaning products used in many homes in Poland and elsewhere.

Our main brand is widely known and liked Titan, which has survived to this day. Interestingly, in order to make it happen, Titan has to undergo a lot of changes, both in terms of image and recipe, within about 20 years. The fact that we have been flexible for so many years and we are able to successfully maintain our position on the market proves the good quality of our products and the trust that consumers place in us.

You will receive a free product for the first order!

Contact us
Zakłady Chemiczne Unia is a company with a rich history! We have been manufacturing and selling household chemistry items since 1950. The goal we set for ourselves was one - to achieve a high cleanliness effect with a minimum of customer effort. The achievement of this goal is possible thanks to the meticulous and exhaustive analysis of users' opinions and the employment of highly qualified management staff. The stable position of the company is guaranteed by strong brands, as well as an increasing range of offered products that are successful on the domestic and foreign market. 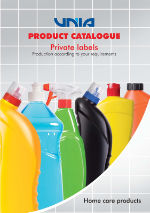